On May 9, 2012, Diego Simeone took his first steps towards his ultimate target, which was nothing other than changing the course of Atletico Madrid’s history. 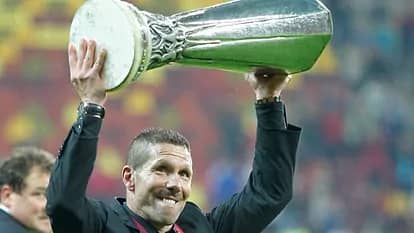 Back in December of that season, Atleti were eliminated from the Copa del Rey at the hands of Albacete, who played in the Spanish third tier back then.

Simeone’s side came into that Europa League final as outsiders, yet six minutes into the game, they opened the scoring through Radamel Falcao.

The Colombian striker netted his second before the break and Diego put the game to bed with five minutes to go.

In his presentation as the new Atletico coach, Simeone promised to help the team rediscover their philosophy and that’s exactly what he has achieved following in the footsteps of legendary coaches such as Marcel Domingo, Max Merkel and Luis Aragones.

After winning the Europa League, he led Atleti to a UEFA Super Cup triumph over Chelsea, who lifted the Champions League a few months earlier.

The following year, Atletico beat Real Madrid at the Estadio Santiago Bernabeu to win the Copa del Rey and in the 2013/14 season they went on to clinch LaLiga Santander.

It total Simeone has managed seven trophies with the club including the Supercopa de Espana in 2014, another Europa League in 2018 and the UEFA Super Cup 2018.