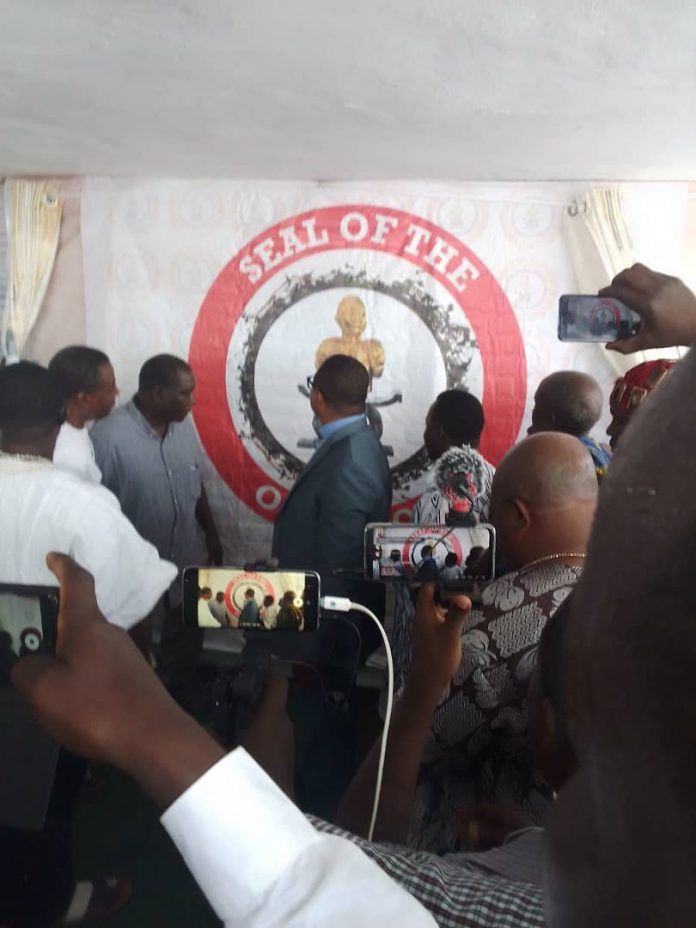 Following the death of Nii Okwei Kinka Dowuona VI, the Osu Kinkawe Dzaase and due consultation with the appropriate Royal Family, Spiritual leaders and elders of Osu have taken steps to install a new Osu Mantse in the person of Notse Nii Nortey Owuo IV, who is known in private life as Professor Bernard Nii Nortey Botchway.

Speaking at the official unveiling of a newly designed seal and the spirit of Osu, the legitimate Kingmaker who doubles as Osiahene of Osu, Nii Osiahene reiterated that the head of the four Royal Families of all the quarters decided to have a new seal which would reflect the tradition, culture and history of the good people of Osu.

According to him, the change to a new seal bacame necessary in order to signify the true pattern and tradition of Osu.

Elements of the new therefore includes the Osu Linguist staff, a black stool surrounded by Nyanyara all bound together by a burgundy circle, signifying unity and consensus building.

Nii Osiahene was optimistic that the linguist staff is made up of four joined heads, corresponding to the four divisions of Osu; with an additional head, set on top of the four;which is Osu Mantse. The black stool represents the authority of the Osu Stool, Sei Kwame, as well as the collective power of the people. The Nyanyara is a sacred plant with unique mystical, Spiritual and protective powers of the Ga people.

He mentioned that this is an old revered symbol of the Osu Mantse and his people.

In order to clearly communicate and prevent unauthorized persons from taking advantage of the Osu Stool symbol, henceforth, it is only the new Osu Stool Seal which will be used for all official communications.The seal is only one of several security features that will be rolled out to protect the integrity of the Osu Stool, it’s properties and activities.

He urged the general public to take note of these changes.