Angela Bamford, one of the three TV personalities who hosted the now defunct show Arena on Kwese TV, has joined Ghone TV.

She now reads the business news on Business Brief on the TV station, a member of the EIB Group.

“News on GHOne TV is unparalleled and authentic. Get up to the minute updates of trends across the globe and in Ghana on @ghonenews with @angelabamfordgh,” the channel announced on Instagram.
“Business Brief with Angela Bamford, first time reading the news,” Angela also announced on Instagram when she shared a video of herself reading the business news to her followers.

She adds to the list of broadcasters on Ghone.

Angela is described as a hard working young TV personality who loves what she does. She started creative arts career at an early age, from singing with the group D3, modelling at Exopa Model Agency and acting to now hosting shows on TV.

From her humble beginnings at the Akosombo International School, she went on to graduate with Diploma in Liberal Arts from North Hunterdon High School in the US. 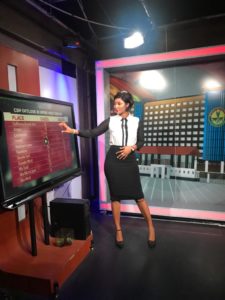 She continued her education at the Raritan Valley Community College (RVCC) where she read communications and then to Rutgers University. 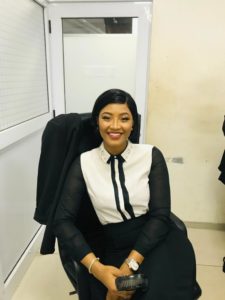 She had worked as a lead presenter at 4syte TV before moving to Econet Media’s Kwese TV and now Ghone.